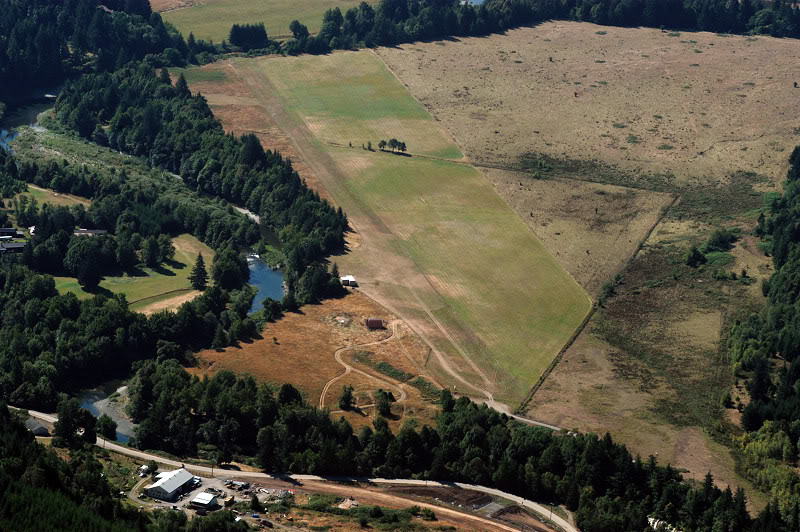 After a few days at Illinois Valley the daytime temperatures were rising up into the mid 90's and it was time to get back to the cool air of the coast. We got up early and packed Tango Charlie with all the camping gear, it was yet another cool sunny morning so we decided to fly across to the small town of Prospect which is located 15 miles southwest of Crater Lake for breakfast. The flight took us north up the valley to Grants Pass, then to the northeast across the top of northern edge of the Medford Class D airspace and then up the rising slopes of the southern Cascades. Prospect State Airport is another of those lower use airports that seem to be in the middle of nowhere, however there is an active aviation scene there with a number of based aircraft and local pilots who arrange the occassional pancake breakfast fly-in. In the small town of Prospect, which is a short walk from the airport, there are a few shops, a Post Office, a small family run period hotel and a pretty good cafe which was to be our destination. I guess the town's existance is down to it being one of the nearest towns to Crater Lake and is actually located on the Crater Lake Highway guaranteeing a good passing trade from tourists.

Lost Creek Lake which was created for Rogue River flood control by the US Army in 1977.

As we flew across the impressive but artificial Lost Creek Lake the airport came into view amongst a landscape covered in trees. A precuationary crosswind pass over the airport confirmed the winds were light from the southwest so I decided to land on runway 02 which has a slight but noticeable 1.5% upward gradient. We parked on the ample tiedown area alongside three other aircraft, which I presume are based there, and started the mile walk into town. The Prospect Cafe and Trophy Room served us some pretty good honest food, nothing fancy but good enough to visit again, we then dropped into the Prospect Store to get some provisions for the trip home.

On the way back to Florence from Prospect we decided to stop for the night at Powers, a small town in the middle of the Coast Range just to the southeast of the seaside town of Bandon, which has it's own airport with 2,500ft grass runway. We didn't have to stop there as Florence was just another hours flying time away but it looked like a nice place to camp and we were in no real rush to get back. Powers sits in a picturesque valley which is surrounded on it's four side by high terrain consisting of forested mountains and high hillsides.

An interesting rock outcrop amongst the thickly forested mountains of the Coast Range.

As you reach Powers after flying across the higher mountains to the south and east you have to lose some 4,000ft to get down into the valley and to pattern height, I opted for a nice leisurely spriral descent over the more open area to the north and then entered the lefthand downwind for runway 31. This is usually the favoured runway as the prevailing summer winds are predominantly from the north, it also has a much more open approach over pasture land. Just before the threshold is a 50 foot 'cliff' down to the Coquille River which runs right beside the airport and I saw a number of turkey vultures flying around looking down at the river for their next meal, they are probably worth looking out for on final if ever visiting the airport.

The Powers runway. The northern third/quarter is very smooth and closely mown, the rest is considerably longer grass but is still in excellent condtion.

I had been told that the first part of 31 could be rough so I decided to land long just in case. Indeed the northern third of the runway looked extremely smooth and well mown, probably by and for a local flyer. I had a closer look later on and although the rest of the runway was slightly rougher it was still very serviceable and in very good condition. Next to the 31 threshold is a tiedown and camping area which had been mown out of the longer grass, it is located at the opposite side of the airport from the access road so is very quiet and private. As you would expect there are no facilities here but the town is a mile walk away and has an extremely well stocked store and several eating places. This is a place to get away from the hustle and bustle of busy modern life!

Tango Charlie in the quiet and remote Powers parking area. If you want to camp at an airport which is away in the peace and quiet Powers is a good option.

The Coquille River flows right next to the airport but you have to walk a while to get down to it.

Tango Charlie in the parking/camping area.

The day had come for our to return to Florence and as always we got up early to take advantage of the cool, smooth morning air. The weather had been very unusual along the Coast for much of the summer with very strong 30kts+ winds frequently occurring from mid morning and this day was to be no different, we were keen on getting airborne as early as we could. On climbing out of the tent we were confronted with an unwelcome low overcast which was obscuring the tops of the mountains surrounding the valley. I checked the conditions elsewhere using XM Satellite Weather on my Garmin GPS, it looked like the cloud was just effecting the local area and the rest of the coast was looking sunny and clear. This type of early morning gloom usually burns off or is pushed away by a stiffening wind pretty quickly so we packed up Tango Charlie to wait for clearer skies to arrive.

As the sun started to climb we could see that the overcast was just a very thin layer and it wasn't long before it had cleared over the valley to the south. It was at this point the expected northerly wind started to develop, pushing the cloud back to the south and threatening to close the large hole that had developed. I decided to take-off on runway 13 out of the light wind and perform a turning climb within the confines of the valley which is wider at it's southerly end. As we climbed above the thin layer of overcast, which was approximately 30ft. thick, and into the bright morning sunshine we turned northbound on top of it and towards Florence. After ten miles or so we left the cloud behind us and had a very pleasent flight home over the beautiful Oregon Coastline.

Mountain top poking through the low early morning overcast on the way back to Florence.